In August 1914, while the global conflict was beginning to take shape, a small group of political exiles from the Russian-ruled area of Ukraine, who were living in Vienna, began an independence movement. It was founded on 4 August 1914 by six men who called themselves the ‘Union for the Liberation of Ukraine’ (Soiuz Vyzvolennia Ukrainy): Oleksander Skoropys-Yoltukhovsky, Marian Melenevsky, Andrii Zhuk, Volodymyr Doroshenko, Dmytro Dontsov and Mykola Zalizniak.

The Union’s first attempt to reach out to the West is held in a collection of printed ephemera at the British Library. The four page leaflet is entitled ‘To the Public Opinion of Europe’ and details their views on the need for Ukraine to be liberated from the rule of both the Russian and Austro-Hungarian governments. 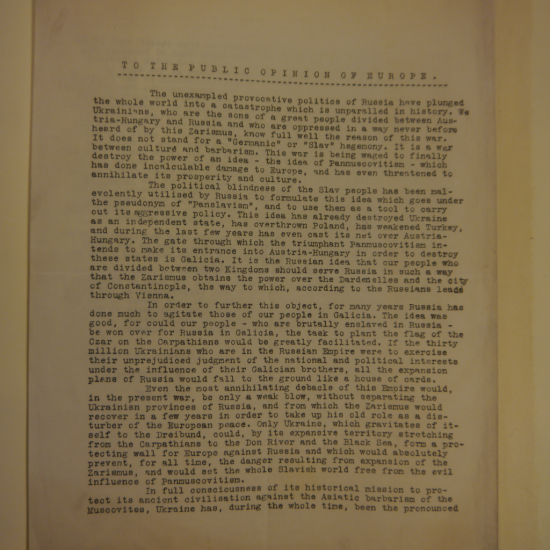 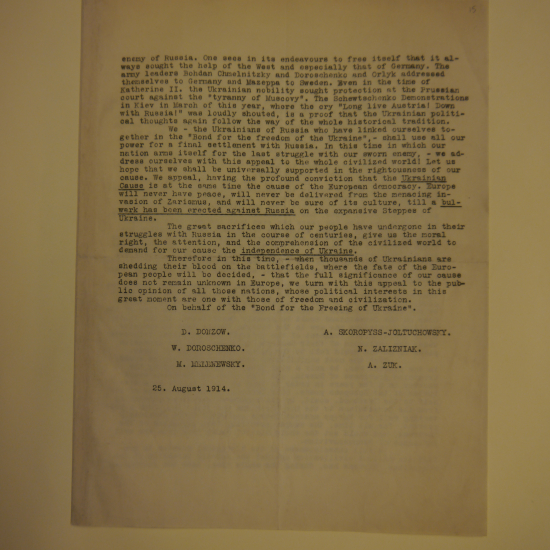 The leaflet was dated 25 August 1914 and it appears that the Union began to distribute them immediately. The New York Times commented on this, saying:

Learn More: Douthat: Putin is losing in Ukraine. But hes winning in Russia

Xem Thêm : When will the Russia-Ukraine war end? How the conflict could finish and latest news on peace talks

The Ruthenian inhabitants of Galicia, one-half the population of the country, founded a League for the Release of Ukraine and flooded Europe from the 25th of August with notifications and descriptions hostile to Russia.

In actual fact this report is a little misleading, there were not very many employees of the Union (only 42) and it was not particularly well supported by the public. What it does indicate is that the Union, and its publication, reached the ears of far-flung America.

Although this foray into printing was successful, their next attempt, a manifesto that was to be signed by the rulers of both Germany and Austro-Hungary was rejected by both countries, and the half a million pre-printed copies they had made to distribute among the public had to be destroyed. Neither Germany nor Austro-Hungary wanted to support an independent Ukraine openly, at the risk of making the political situation with Russia worse. Although the countries would not sign the manifesto, both sent the Union money to help spread the message about an independent Ukraine. After this failure to be officially recognised by the two countries, the Union moved to Berlin, and the members limited themselves to printing propaganda leaflets and distributing them along the Eastern Front. The Union had offices in neutral Switzerland, as well as Romania, Sweden, Norway, Britain and the United States, to help pass along information about their cause. 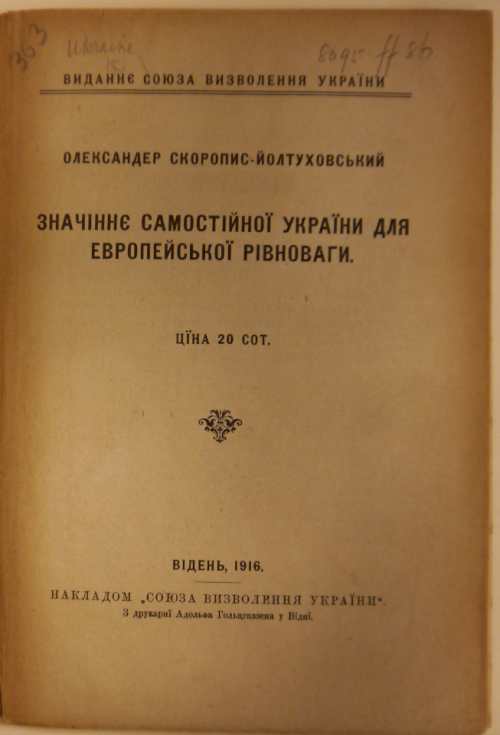 In 1915 the Union began to fight for the rights of Ukrainian prisoners of war. Originally these prisoners were detained with people from other countries, but the Union fought for separate, Ukrainian, camps. These Ukrainian prisoner of war camps were established, and captured soldiers could choose whether they wanted to move into these special camps with their countrymen. The Union went around the camps delivering citizenship classes, in order to try and win sceptical soldiers over to support for an independent Ukraine. From: Sim pisen’. Hostynets dlia ukrainskykh voiakiv vid “Soiuza vyzvolennia Ukrainy [‘Seven Songs. A Present for Ukrainian soldiers from Union of Liberation of Ukraine’], with the stamp of the Union on the left-hand page (Vienna, 1915) cinemaboxhd.org.10, and available online.

But in March 1917 the Ukrainian Revolution began. It was begun in Ukraine, by people who lived there, and the Union (still in Berlin) had no connection to the revolution. In actuality the Union had little, if any, connections in Ukraine during the years 1914-1917. Despite the Union fostering national pride among prisoners of war, and gaining some (financial) recognition from the Austrian and German governments, the revolution has overshadowed their efforts, and they have largely been forgotten in the history of Ukrainian independence.

Watch more: Israel leverages Russia ties to try to mediate between West and Putin. Will it work?

Ann-Marie Foster is a PhD placement student at the British Library cataloguing the First World War Ephemera collection. Her research examines the ways in which families used ephemera and memorial objects to remember loved ones who died during war or in a disaster.