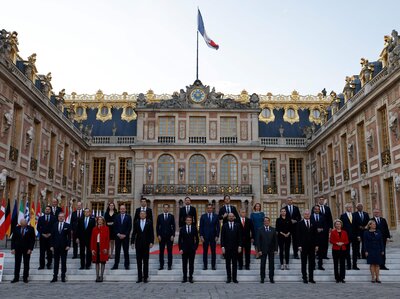 Rami al-Fares says he is still shaken by the dozen air raids that struck the surgical hospital in Kfar Nabel, a town in the south of Syria’s rebel-held Idlib province, during the five years he worked there as an X-ray operator.

The first attack in 2014, he says, killed a newborn baby and two doctors.

“We even shared the coordinates with the United Nations to make sure we are not targeted any more,” he told Al Jazeera from Armanaz, a town further north where he fled after Syrian government and allied Russian forces bombarded Kfar Nabel and its surroundings in late 2019.

When al-Fares saw the news last week about Russia bombing a maternity hospital in the Ukrainian port city of Mariupol, memories came flooding back.

“It was just like what we went through. The same tactics and scenes,” al-Fares said, claiming that attacks on hospitals increased when Russia began launching air raids in 2015 in support of Syrian government forces.

“We lived in constant fear. You could never forget it.”

Russia denies targeting civilian infrastructure during what it calls a “special military operation” to “demilitarise and “denazify” Ukraine – a claim rejected by Ukraine and its allies as a groundless justification for war. Foreign minister Sergey Lavrov said the Mariupol hospital that was struck on March 9 had stopped treating patients and was being used as a “base of the ultra-radical Azov Battalion”.

Some three million people have been forced to flee Ukraine since Russia launched its multi-pronged invasion on February 24, according to the United Nations. And after years of providing direct military support to President Bashar Al-Assad in the Syrian uprising-turned-war, some experts and Syrians say Russian President Vladimir Putin has now been using the same playbook in Ukraine.

“It is the identical scenario being repeated in Ukraine, as it happened in Syria,” said Mohammad al-Shebli, spokesperson for the Syrian Civil Defence or White Helmets, a volunteer search-and-rescue group operating in rebel-held parts of Syria, calling the country Putin’s “playground”.

“Everything that provides life and sustainability for civilians is a target for Russian attacks.”

Xem Thêm : Ukraine and Beyond

On March 9, Amnesty International said an investigation had found that a Russian air raid in which at least eight unguided aerial bombs were used had killed dozens of civilians in Chernihiv, northern Ukraine, adding the attack constituted a war crime. Human Rights Watch also said a March 3 attack caused significant damage to a hospital and several residential and commercial buildings, one of which contained a pharmacy.

According to the UN, at least 691 civilians, including 48 children, have been killed since the war started but the true toll is likely to be significantly higher.

“Amnesty has documented indiscriminate attacks including the use of missiles and other explosive weapons with wide area effects in densely populated areas as well as cluster munitions killing and injuring many civilians.”

Meanwhile, experts say Russia appears to have also adopted the practice of enforcing sieges as a military strategy in Ukraine – nowhere more intense than in the strategic port city of Mariupol.

The situation in the bombed-out southeastern city of 400,000 people is grim, with residents facing major food, water, heating and electricity shortages.

In desperate attempts to secure basic necessities, people have been collecting water from streams and melting snow, while others without internet access use their car radios to pick up news from areas controlled by Russian or Russian-backed separatist forces.

Russia and Ukraine agreed to establish safe routes for civilians to evacuate and aid convoys to reach Mariupol, though several attempts have faltered, with the two sides blaming each other for the failure. About 20,000 people have managed to flee the city since early March.

Ruslan Trad, political analyst and co-founder of Bulgaria-based De Re Militari journal, said the pattern of implementing sieges and establishing brief “humanitarian corridors” to displace the population is a tactic Russia picked up in Syria.

“The most obvious examples are in the siege of Aleppo and Eastern Ghouta,” Trad said. “It is in these areas that the Russian military was advising al-Assad’s forces and also taking notes on its effectiveness.”

Xem Thêm : The EU will welcome Ukraine but won’t fast-track its membership application

Syrian government forces and their allies used such deadly tactics in a number of locations during the 10-year war, with residents coming under heavy bombardment and left without adequate medicine and food.

In 2017, New York-based watchdog Human Rights Watch accused Russian and Syrian government forces of being involved in unlawful strikes in then-besieged Eastern Ghouta, a suburb of the capital, Damascus, using widely-banned cluster munitions, obstructing aid to the population and leaving them to starve.

The Syrian government and its allies have said the sieges only target areas controlled by armed opposition groups, adding they do not target civilians, who they claim are being held hostage.

After years of torment for the civilian population, such sieges would typically end with talks between government forces and armed opposition that would often result in evacuation deals that saw the families fleeing the besieged areas for the northwestern Idlib province, the rebels’ last stronghold.

“The likelihood that the civilian population be returned after the cessation of hostilities is small, judging by past experiences,” Trad said.

Ali al-Dalati fled besieged Wadi Barada, northwest of Damascus, in early 2017. The 24-year-old said he has closely been following the developments in Mariupol, a situation, he says, “feels the same”.

“Seeing Ukrainians leaving their homes honestly reminds me of the women and children who fled Wadi Barada,” he told Al Jazeera in Idlib.

While Ukrainian and Russian officials are engaged in negotiations, it is unclear whether the two sides will reach a deal soon to end the war.

“Russian and Syrian forces have never been held accountable for the war crimes committed against civilians in Syria which has enabled both forces to continue violating the laws of war with complete impunity for a decade,” Semaan said.

“The lack of accountability and indifference to civilian lives portrayed by the Russian and Syrian government has led to the devastating loss of thousands of civilians in Syria and obliteration of civilian infrastructure.”

Learn More: What Happened on Day 45 of the War in Ukraine