Rice is the primary staple for more than half the world’s population, with Asia, Sub-Saharan Africa, and South America the largest consuming regions. The main species is Oryza Sativa, which is believed to have originated in Asia from the Graminaceae (grass) family. Although rice is produced over vast areas of the world, the physical requirements for growing it are limited to certain areas. Economically sound production typically requires high average daytime temperatures but cooler nights during the growing season, a plentiful supply of water applied as needed, a smooth land surface to facilitate uniform flooding and drainage, and a subsoil hard-pan that inhibits percolation (downward movement of water through the rice bed). Four major types of rice are produced and traded worldwide (table 1).

Each of these regions normally specializes in a specific type of rice, referred to in the United States by length of grain—long, medium, and short. U.S. long-grain varieties typically cook dry and separate, while U.S. medium- and short-grain varieties are typically moist and clingy or sticky. In general, long-grain production accounts for around 75 percent of U.S. rice production, medium-grain production for about 24 percent, and short-grain for the remainder. In 2020, the United States produced 227.6 million hundredweight (cwt) of rough rice, up 23 percent from 2019 but well below the record 243.1 million cwt harvested in 2010.

U.S. long-grain rice production is concentrated in the South (Arkansas grows approximately 56-58 percent of the U.S. long-grain crop.) California is the main producer of medium-grain rice, growing 69-76 percent of the crop, although Arkansas grows a substantial amount of medium-grain, especially in years when California is experiencing drought. Louisiana typically harvests a much smaller quantity of medium-grain rice. Short-grain rice is almost exclusively grown in California. All U.S. rice is produced in irrigated fields, achieving some of the highest yields in the world. Producers in the United States can seed aerially in flooded fields, or they can drill or broadcast seed into dry fields. California producers seed primarily by air directly into flooded fields. Most producers in the Delta drill or broadcast seed into dry seedbeds, while growers in southwest Louisiana and on the Texas Gulf Coast seed both aerially into flooded fields and drill or broadcast seed into dry seedbeds.

Marketing years vary by State, in Texas and Louisiana beginning July 1, in Arkansas and Mississippi August 1, in Missouri September 1, and in California October 1. Some producers in Texas and southwest Louisiana are able to reflood their fields after harvest and achieve a partial second or “ratoon” crop from the stubble remaining in the field after the first-crop harvest. 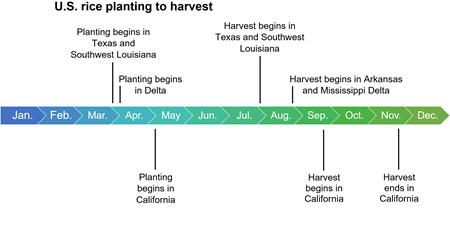 In 1981, the United States planted the largest all-rice acreage to date, more than 3.8 million acres. During the remainder of the 1980s, participation in acreage-reduction programs, along with typically low prices, pushed the number of planted acres down in most years. Yields per acre for long-, medium-, and short-grain rice have steadily increased since the 1970s. Yields per acre are typically higher in California than in the South, largely due to normally different yields of the varieties grown in each region. As a result of a severe drought and low reservoir levels in 2014, California rice plantings dropped sharply, and the State’s rice area has yet to return to predrought levels (see the commodity focus in Rice Outlook, April 2018 for more discussion)

The United States is a consistent, timely supplier of high-quality rice in both the long- and combined medium- and short-grain global markets. While the United States accounts for less than 2 percent of global rice production, it ships around 6 percent of global exports and is currently the fifth-largest exporter. Exports are thus important to the U.S. rice industry, with 45-50 percent of the crop typically exported each year. 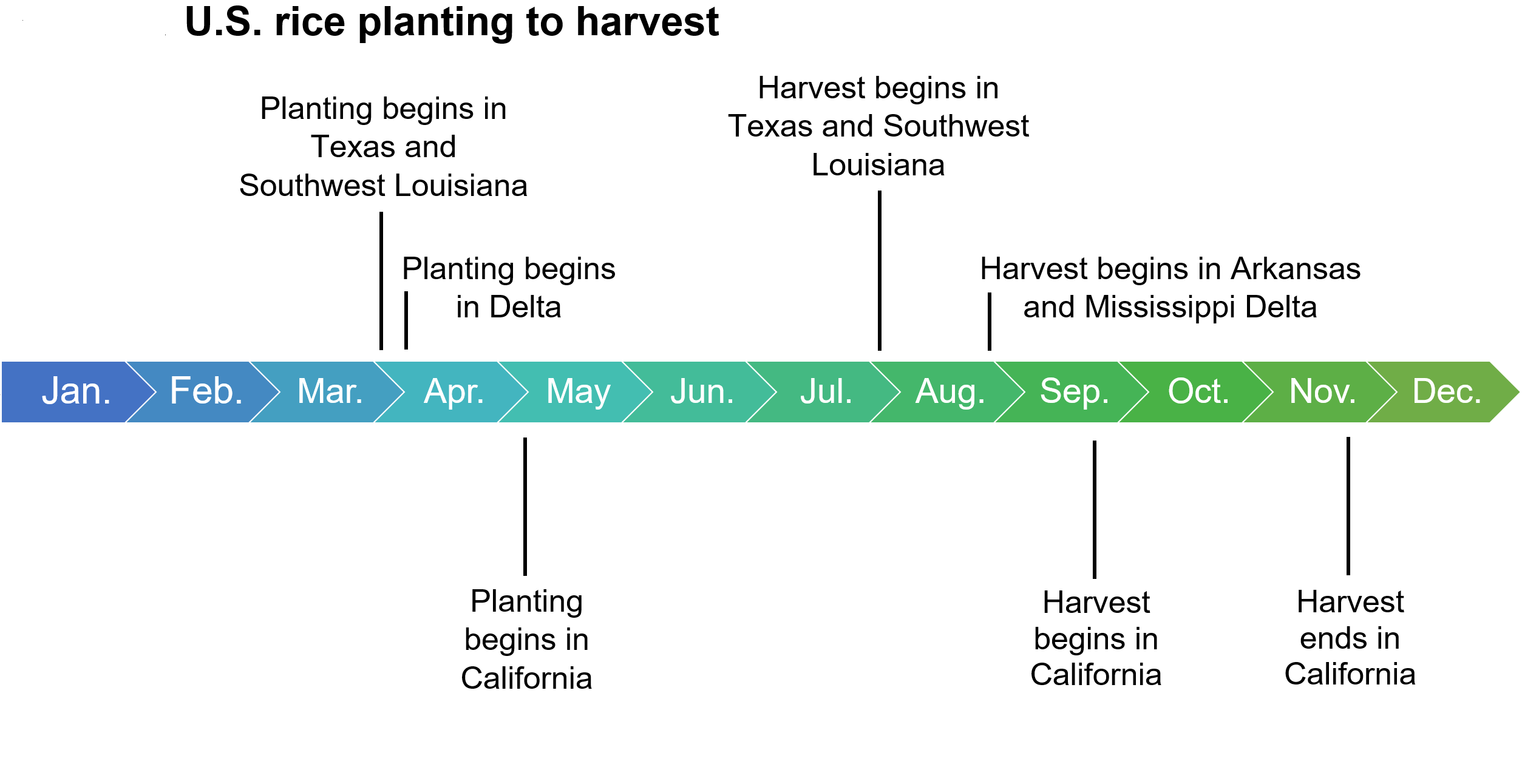 Milled rice (including brown rice) accounts for the majority of U.S. exports, followed by rough rice. Rough rice exports began a long-term increase in the mid-1990s as several countries in Latin America—primarily Mexico and Central American countries—reduced support to producers and opened their markets to imported rice. The United States initially faced little competition in these predominately rough rice markets. However, since 2010, South American exporters have shipped substantial amounts of milled rice to the markets, and more recently some rough rice as well. In addition, since 2008, the United States has shipped rice to northern South America, where it also faces competition from South American exporters. Asian exporters have shipped milled rice into Latin America as well. However, except for shipments to Cuba, the quantities are much smaller. Historically, the United States has been the only major exporter that allows rough rice exports, although most South American exporters—all medium-sized exporters—ship some rough rice to other Latin American countries. 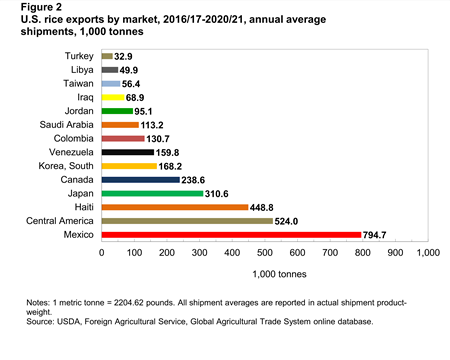 U.S. rice imports have trended up sharply over the past 20 years. Most are aromatic varieties from Asia—jasmine from Thailand and basmati from India and Pakistan. In addition, China has recently returned as a supplier of medium-grain rice to Puerto Rico, a U.S territory. Over the past 5 years, the United States has imported, on average, about 11 percent of its total supply of rice, with a record 14 percent in 2019/20. 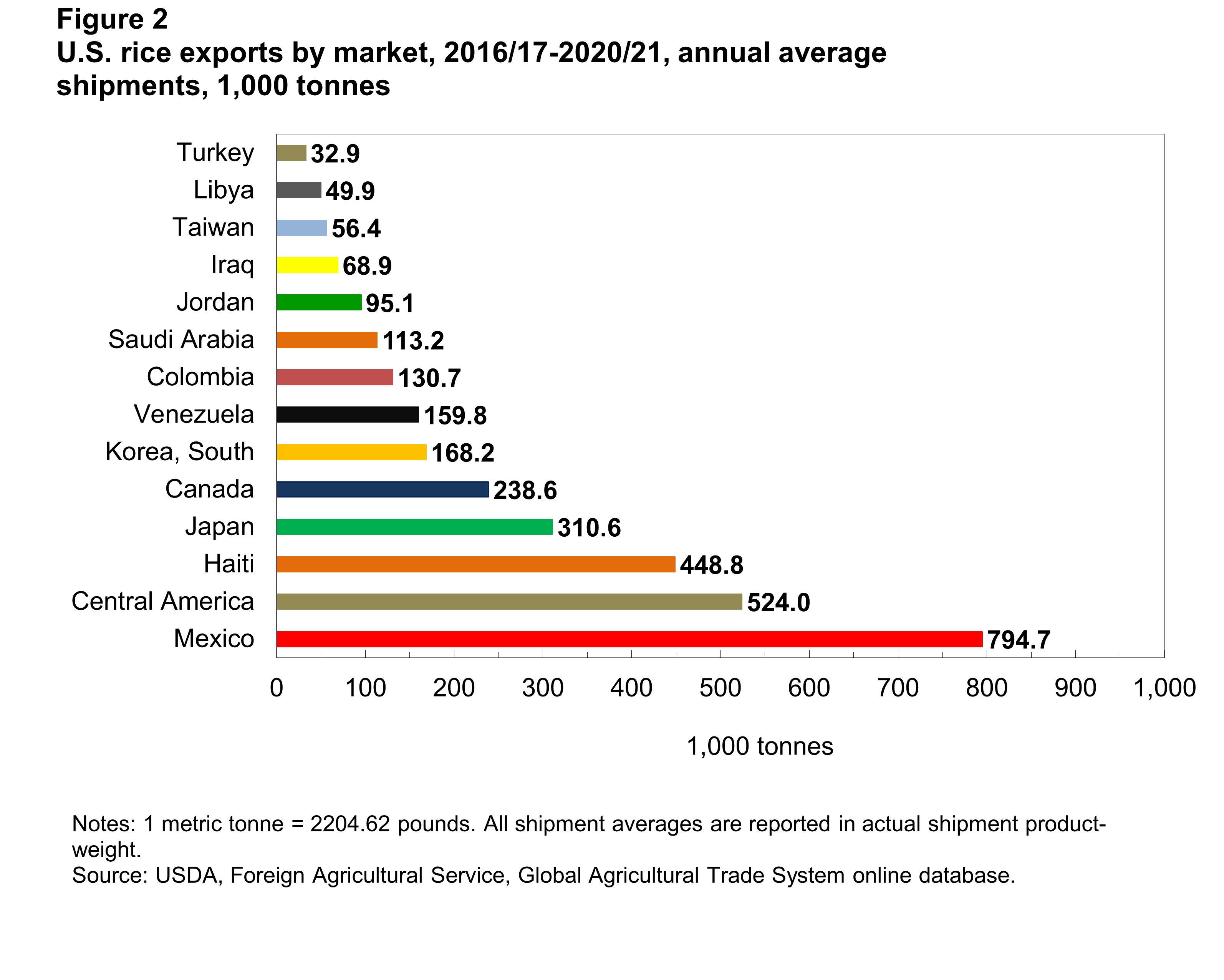 Marketing and Use of Rice

Five different products can be produced from rough rice: hulls, bran, brown rice, whole kernel milled rice, and brokens. Brokens are separated into two categories: second heads, which are used for flour, and brewers, which have been historically used for beer and in pet food.

The first stage of milling removes the hull, producing brown rice that can be cooked and consumed. The next stage removes the bran layer, leaving whole-kernel milled white rice but creating some broken kernels as well. Most of the bran is used in animal feed.

Prior to milling, rough rice may be parboiled, a process of soaking the rice in water and steaming it under intense pressure. Parboiling makes the rice less likely to break during milling and pushes nutrients from the bran layer into the kernel. Parboiled rice typically sells at a premium compared to regular milled rice.

Care is necessary throughout the production, drying, storage, milling, and marketing phases to minimize the number of broken kernels, which sell at a considerable discount to whole-kernel rice. Virtually all U.S. rice purchased by consumers or sold to restaurants is whole-kernel milled rice. However, 15-18 percent of the U.S. crop is exported annually as rough (unmilled) rice and is eventually milled in the importing country. See U.S. Standards for Rice.

Long-term growth in rice use in the United States is partly a result of the Nation’s changing ethnic composition, with high per capita rice-consuming groups increasing their shares of the U.S. population. Rising demand for gluten-free and continue introduction of new rice-based products have also contributed to growth in domestic use. Domestic uses of rice include food for human consumption (both direct food use and processed foods), beer, and pet food.

Producers who hold base acres of rice and other covered commodities are eligible to enroll in the PLC program on a commodity-by-commodity basis. Payments are made when market prices fall below the reference price set in the 2018 Farm Act. Reference prices for rice are as follows:

Xem Thêm : Laptops by the Numbers: Market Share and More

The loan rate for all rice crops is set by the farm bill at $7.00 per hundredweight.

Globally, the top rice-producing country is China, followed by India.

Since 2012, India has been the largest global rice exporter, currently shipping more rice annually than the combined shipments of the next two largest exporters. India’s rice exports more than doubled in 2012, after the Government eliminated its export ban on non-basmati rice. Thailand, Vietnam, Pakistan, the United States, China, Burma, and Cambodia are the next largest rice exporters, accounting for a combined 87-90 percent of the global rice trade. Burma, Cambodia, and China substantially increased exports in recent years, with China returning as a major exporter in 2017. In contrast, U.S. rice exports declined 17 percent in 2018 and have only partially recovered, due in part to greater competition in several Latin American markets from South American suppliers, and, in some years, to tight U.S. supplies. Thailand’s exports dropped substantially in 2019 and 2020 and have remained well below prior levels. 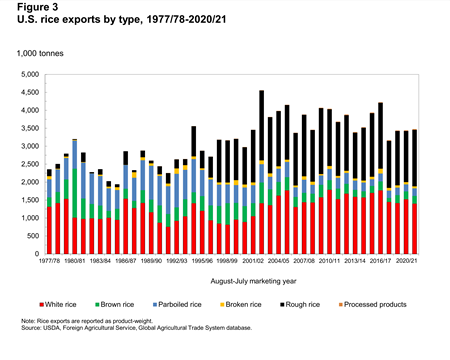 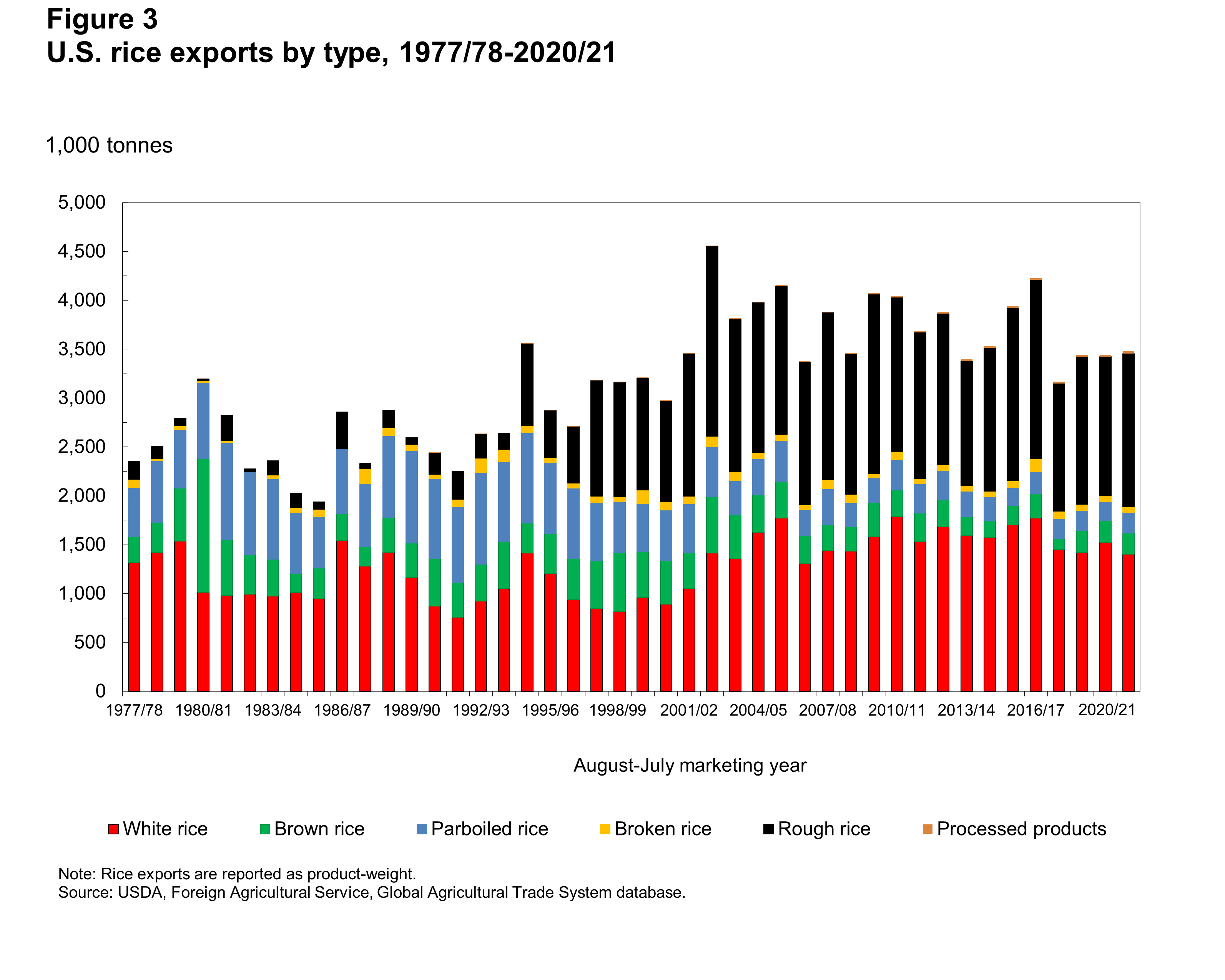 On the global rice import side, Sub-Saharan Africa is the largest rice importing region, exceeding total imports by all of Asia. The Middle East remains a large global import market, with imports trending higher and accounting for more than 70 percent of the region’s rice consumption. Southeast Asia is also an important import market but exhibits no long-term expansion, counting on bumper crops in most years. East Asia’s rice imports have been boosted over the past decade by strong purchases by China. South Asia is the smallest rice importing region in Asia, although Bangladesh’s imports can rapidly increase after a crop shortfall, as happened in 2017 and 2018 after a weather-reduced harvest. South American rice imports have shown no sustained growth since 2012, mostly due to little, if any, consumption growth and near-steady production. Both North America and the EU are currently importing record or near-record amounts of rice, although both regions have a low per capita rice consumption compared with Asia and Sub-Saharan Africa. These two regions are large markets for Asian aromatic varieties, specialty rices that are high-priced and account for a small, but growing share of global rice trade.