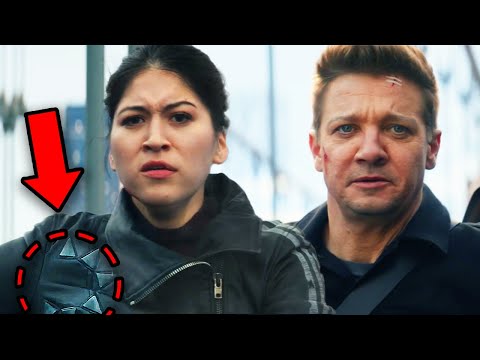 To close out an impressive slate of nine projects in 2021, Marvel brought the debut of Jeremy Renner’s first MCU solo project in December with the Hawkeye Disney+ series. Outside of some backlash tying back to the show’s largely inconsequential post-credits scene, fans had a largely positive reception to Renner’s return to his original Avenger role after Avengers: Endgame.

The bulk of Hawkeye gave fans a fresh look into the post-Endgame world as Clint Barton and Hailee Steinfeld’s Kate Bishop uncovered a massive criminal underworld rising to prominence in a new world. Even though almost the entire six-episode run came as another slam-dunk effort from the MCU’s Phase 4 narrative, the one scene that didn’t land with the entire MCU fan base was the post-credits clip from Episode 6.

A rarity for the MCU, this scene didn’t set up anything for the future regarding plot or characters; instead, Marvel gave fans the full musical number “Save The City” from the Broadway production Rogers: The Musical that was featured in Episode 1. Recently, one writer behind this musical number shared his thoughts on the lukewarm reception to that unique clip.

Speaking with Inverse, Rogers: The Musical composer and co-lyricist Marc Shaiman addressed some of the backlash from the post-credits scene in Marvel Studios’ Hawkeye. Specifically, the end-credits stinger scene only showed a full version of the musical number “Save The City” from the Avengers-inspired Broadway play.

Shaiman admitted that he read a ton of the backlash from deciding to show this scene instead of something teasing the MCU future, admitting how hard it was to navigate that “juggling act” as fans, critics, and the studio saw the results:

Learn More: Sieren’s China: The dragon’s side of the moon

“I dangerously read just about everything. And so often it can be like, ‘oh, I wish I hadn’t read that,’ or just getting facts wrong. But it was really nice to see someone completely understand the balls you have in the air with the juggling act.”

Speaking on the song specifically, part of the challenge with writing the track itself was making it something that both Barton and non-musical fans “would roll their eyes at” while still developing a good song:

“The hard part was writing a song that had to be something that Hawkeye or people who don’t like musicals would roll their eyes at. It’s been tough because we did our job well, and that means there are a lot of people who were like, what is this?”

Addressing the backlash, Shaiman admitted that he fully understands the standard that the MCU has set and how fans were expecting to see “a new kernel of what’s gonna happen next” in future entries. However, he also understands that that response was partly due to the fact that he and his team did their job so effectively:

“I understand that there are a lot of people who would’ve expected and wanted the post-credits scene to be some new kernel of what’s gonna happen next in the MCU. I completely get it. But it has been tough to know that by doing our job well, we made something that not everyone likes. It’s been bittersweet almost, but to be in the Marvel Cinematic Universe is crazy.”

Moving past the fan reception, Inverse also addressed the possibility of “Save The City” being in contention for an Emmy Award in 2022, the same award that “Agatha All Along” won after premiering in WandaVision. While comparing the two by the fact that the WandaVision number “didn’t have that odd tightrope” to walk the way Hawkeye did, he hopes that “Save The City” will see that kind of recognition, but also said he “can’t think about” that right now:

“I mean I hope so! “Agatha All Along” didn’t have that odd tightrope that we had of creating something that was intentionally something to be eye-rolled at by at least Hawkeye, you know? They got to just write a perfect one-minute-long thing. But I think we did a good job and I hope when things roll around, we might get a nomination, but you can’t really think about that stuff.”

Hawkeye Musical Not Hitting The Bullseye

Marvel Studios has set a standard for more than a decade of delivering fun and unique teases in its post-credits scenes, which started with the MCU’s very first movie in 2008’s Iron Man. From delivering the first look at Thanos in The Avengers to showing Peter Parker’s identity being revealed in Spider-Man: Far From Home, almost no other franchise in pop culture has matched the hype that these scenes bring with every new project.

Even though some movies have included less meaningful scenes, such as a Captain America PSA in Spider-Man: Homecoming, almost every MCU movie and show to date has included a brief glimpse into the future for fans to look forward to later. That all changed with Hawkeye, which expanded on Rogers: The Musical but ended at just that.

While Shaiman understood fans’ feelings toward not seeing anything that gave a look at the future, he knew that the team behind the musical number did their job well and delivered an MCU-standard scene. Whether it brings the same critical awards success as WandaVision is still up in the air, but it’s evident that Marvel Studios is putting in a concerted effort to make songs like this hit just as hard as the superhero action.

As fans wait for more specifics on Marvel Studios’ slate of entries for 2022, “Save The City” will continue making the rounds online and on Disney+, giving MCU and musical fans alike something to jam out to.