Season four, episode 18 of M*A*S*H is unlike any other episode of the series. We don’t see any main characters aside from Hawkeye and we never see the 4077th. The entire episode takes place in a small Korean farm house miles away from anything familiar. Who would be bold enough to pull off such a departure from the norm? One of the brilliant minds responsible for bringing the show into existence, Larry Gelbart, who directed and co-wrote the aptly titled “Hawkeye.”

The story starts with Alan Alda’s Captain Benjamin Franklin “Hawkeye” Pierce driving back to camp from an aid station. He swerves to avoid children playing in the road and crashes his Jeep. The children lead him to their parents’ house where he tries to communicate that he can’t rest or go to sleep for fear that he suffered a concussion.

In order to keep himself awake, Hawkeye sings, remembers childhood in Maine and praises the magnificence of the human thumb. The entire episode is almost an extended monologue, a rambling one man show. Less capable actors might find the feat intimidating but Alda pulls it off with this trademark mix of sarcasm and sincerity.

Xem Thêm : Separating Myth from Legend about the Medieval Dragon 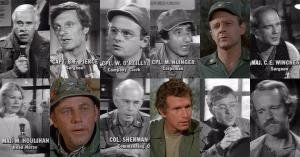 Did you know? This is the only M*A*S*H episode to feature every major character from the show

M*A*S*H never shied away from serious topics or off-beat storylines and “Hawkeye” is one of the clearest examples of how the show eschewed convention. Not many other sitcoms would set aside its talented cast in favor of one character stranded by himself in the company of people unable to speak the same language.

The episode received two Emmy nominations for writing and cinematography. A writing nod is obvious but recognizing camerawork for something that takes place almost entirely in one house might seem odd. But it’s because of the limited location, and how the camera moves around in long, uninterrupted takes, that make it special. The episode didn’t ultimately win in either category but the nominations prove the thought that went into every aspect of the production, things that other shows might not care as much about.

What do you think of this unique episode? Let us know in the comments!

*available in most MeTV markets Add to Favorites Remind Me