Trang chủ  »  News  »  Russia may have fallen into a Ukraine trap set by the U.S
Nội dung bài viết 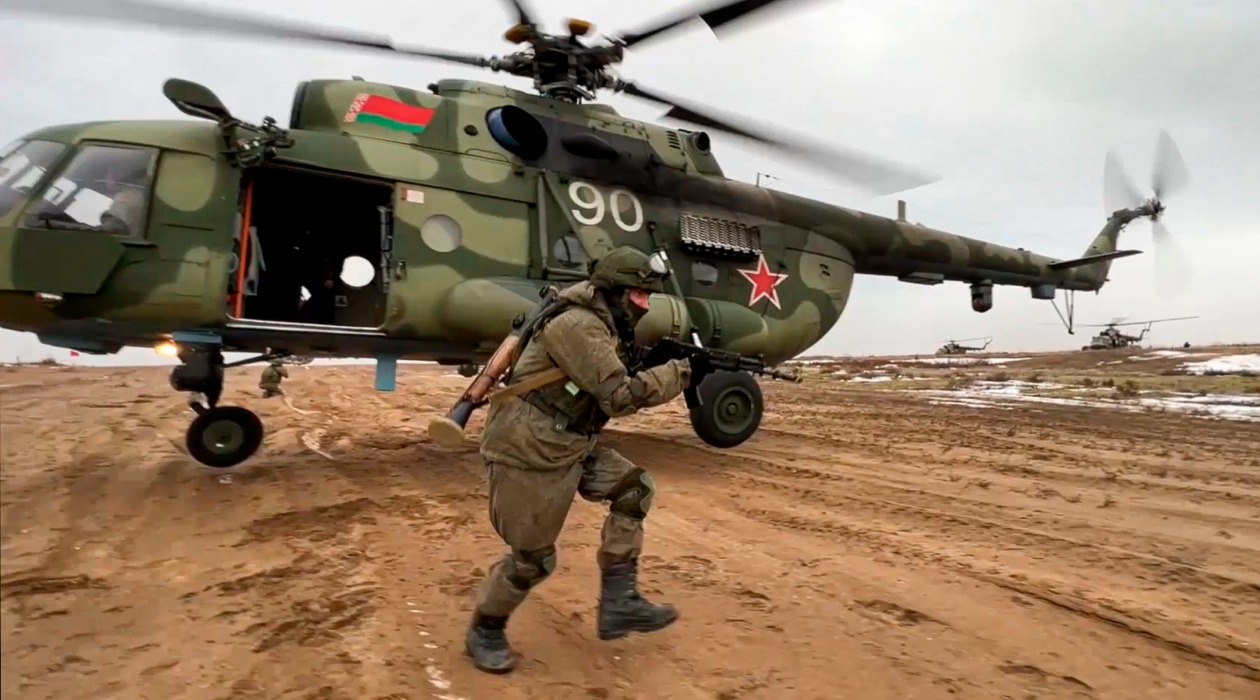 A Russian marine runs after jumping from a landing helicopter. By invading Ukraine, a top political economist says that Russia may have landed in a trap set by the U.S. | Russian Defense Ministry Press Service via AP

Fresh analysis is pointing toward the conclusion that, with its invasion of Ukraine, Russia may have stepped into an Afghanistan-style trap set by the U.S. In launching a criminal invasion of its neighbor and thus economically isolating itself from much of the world, the Kremlin has effectively done exactly what the U.S. and NATO wanted.

Bạn Đang Xem: Russia may have fallen into a Ukraine trap set by the U.S

That according to Robert H. Wade, Professor of Global Political Economy at the London School of Economics. In an extensive analytical article just published by LSE, Wade argues that although Russia’s actions in Ukraine are inexcusable, the designs for the current war were drawn up more in Washington than in Moscow.

His contention is that a long, drawn-out conflict in Ukraine and the punishing sanctions now being inflicted on the people of Russia are components of a plan to eventually bring down the government of Vladimir Putin and replace it with one that is more compliant with U.S. dominance of the world—a new, weaker administration akin to that of former Russian President Boris Yeltsin in the 1990s.

Wade writes that there exists a “long-standing U.S. strategy for regime change in Moscow, with Ukraine as the pivot.” The self-determination of the Ukrainian nation and the lives of the people of Ukraine are pieces of what former U.S. National Security Advisor Zbigniew Brzezinski called “The Grand Chessboard” of maneuvers centered on sustaining U.S. primacy in the world.

It’s a plan that has played out over the course of several U.S. presidencies and reflects the geopolitical strategy of the U.S. imperialist state as a whole and not simply the foreign policy of the Biden administration alone.

Exploiting legitimate Russian security worries, combined with the Putin government’s own imperial ambitions, made setting the trap a rather straightforward, if not simple, affair.

Taking advantage of Russia’s weakness following the downfall of the Soviet Union, the U.S. moved to ensure it would never again face a challenger to its dominance in Europe. The U.S.-led NATO alliance steadily expanded eastward in the 1990s and 2000s, with countries formerly aligned with the USSR, like Poland, the Czech Republic, Bulgaria, and Romania, all being eagerly welcomed.

But Ukraine was “the biggest prize,” Wade says, quoting a 2013 admission from Carl Gershman, director of the National Endowment for Democracy, a front for U.S. interference in other nations.

In 2014, a year after Gershman painted a target on Ukraine, the government of President Viktor Yanukovych was overthrown in a coup led by Western-aligned business figures and right-wing nationalists, with the close assistance of the U.S. State Department.

The new U.S.-backed government issued a number of provocative decrees aimed at the Russian-speaking eastern regions in the Donbass area. The day immediately after Yanukovych was forced from office, Russian lost its status as an official language alongside Ukrainian, and Russian-language news, television, and radio were all proscribed.

Unsurprisingly, the new government’s actions prompted resistance in the Donbass and increased sentiment for leaving Ukraine. In response, the government in Kiev launched an offensive against the breakaway provinces, resulting in a civil war that took nearly 15,000 lives over the eight years before Putin’s invasion.

Meanwhile, since 2015, the CIA has been conducting a secret program to provide intensive special operations training to select Ukrainian paramilitary units and intelligence agents in preparation for a war with Russia. Instruction took place in Ukraine, but Ukrainians were also brought to the U.S. for more specialized training. The covert scheme was initiated by the Obama administration, expanded under Trump, and then further augmented by Biden.

The CIA has insisted the program, already seven-years-old, is all a defensive affair. But in a media report from January 2022, just before the Russian invasion, one former CIA official anonymously confirmed, “The United States is training an insurgency.” Speaking bluntly, the former official added that the whole point of the operation was to teach Ukrainians how “to kill Russians.”

Wade contends that the current war was likely still preventable up until December 2021, or even later. “The Kremlin presented treaty proposals, which included implementation of the eight-year-old Minsk peace accords (which include a commitment that Ukraine not join NATO); dissolving extreme right Ukrainian militias; and engaging in serious negotiations about a new security architecture in Europe,” he reminds readers.

“The U.S. and NATO consistently refused to negotiate,” Wade points out. He speculates that it may have been Ukrainian President Volodymyr Zelensky’s Feb. 19th speech at the Munich Security Conference which left Putin firm in his decision to launch an invasion. Zelensky said there should be a clear path for Ukraine to join NATO and expressed regret that Ukraine had surrendered its nuclear weapons when the Soviet Union fell apart.

That same week, the Organization for Security and Cooperation in Europe (OSCE) reported that Ukrainian military forces dramatically stepped up their artillery shelling of Russian ethnic areas in the Donbass, likely with U.S. and NATO approval.

When Putin ordered his troops to cross the Ukrainian border on Feb. 24, Wade argues the Russian leader took the bait put out by the West. In crafting his analysis, Wade goes to great lengths to make the point that seeing the Ukraine war as a trap set by the U.S. does “not…excuse Russia’s actions.” He is no Putin apologist; rather he makes a comparison to the situation of former Iraqi President Saddam Hussein.

In 1990, the U.S. set a trap for Hussein. When Iraq was involved in a dispute with the government of Kuwait, Washington assured its former ally it would not interfere in any fight between the two. When Hussein invaded Kuwait, however, it gave the U.S. the justification needed to destroy Iraq militarily and economically.

Like Hussein, Putin makes a convenient villain. His invasion was a clear violation of international law; it trampled on the sovereignty of Ukraine (which still matters, no matter what one’s opinions are of the current Ukrainian government’s legitimacy); and by most accounts, Russian forces have executed their orders with brutal enthusiasm. These realities have made it easier to coalesce public opinion against Russia in many countries.

Returning to Brzezinski, Wade’s analysis suggests that the Ukraine trap is even more similar to the one set for the USSR by the CIA in Afghanistan in the late 1970s. At that time, the U.S. secretly began funding the armed mujahideen groups—Islamist fundamentalist guerrilla fighters—against the socialist government of Afghanistan with the hope of provoking the Soviet Union to intervene on behalf of its ally.

The plan worked. In late 1979, Soviet forces entered Afghanistan at the request of Afghan authorities. They wouldn’t leave for another ten years, just as the Soviet Union itself was on the verge of death. As National Security Advisor to President Jimmy Carter, Brzezinski was the architect of the plot. Wade quotes Brzezinski’s memories of the plan:

“That secret operation was an excellent idea. It had the effect of drawing the Russians into the Afghan trap, and you want me to regret it? The day the Soviets officially crossed the border, I wrote to President Carter, essentially: ‘We now have the opportunity of giving the USSR its Vietnam War.’”

Today, of course, there are no socialist or progressive governments involved on any side of this conflict. Instead, there is a confrontation of imperial powers and states being used as pawns in a grand U.S. strategy and a perhaps less-than-grand Russian one. And with the Kremlin now admitting to “significant losses” and pulling back its forces to focus on the battle for eastern Ukraine, it would appear that it is the U.S. plan, and not the Russian one, which is coming to fruition so far.

The next step in the U.S. strategy, according to Wade, consists of two parts, both of which are already in motion.

The U.S. hopes that the weapons-plus-sanctions strategy will “last long enough for Russians to rise up to overthrow Putin and install a Yeltsin-like president more sympathetic to the West,” Wade says. He believes the words of Biden and other Western leaders in recent weeks reveal the desired endgame.

“For God’s sake, this man cannot remain in power,” Biden said in Warsaw on Mar. 26th. Earlier, on Feb. 24th, the president admitted the sanctions were not intended to prevent an invasion but rather to punish “so the people of Russia know what he [Putin] has brought on them.” The British Armed Forces Minister, James Heappey, similarly declared that the sanctions are meant to ensure that “Putin’s days as president will be numbered.” French Foreign Minister Jean-Yves Le Drian said the intention is “asphyxiating Russia’s economy.” And U.K. Prime Minister Boris Johnson’s spokesperson said in early March that the sanctions “are to bring down the Putin regime.”

Of course, the objectives of the U.S. and NATO in this war go beyond simply engineering the overthrow of the Putin government. There is also the need to keep Russia as an enemy, even if a more pliable puppet were to be put in charge of the country.

Maintaining the view of Russia as a threat backs up the supposed need for U.S. leadership in the world, keeps NATO united, and justifies major increases in military spending—in the U.S. but also in Europe (Germany in particular). Having big nation-state adversaries like Russia (and China) surely brings in higher profits for arms manufacturers than campaigns against “smaller threats” like terrorist groups or “rogue regimes” in the developing world.

For those against war and war profiteering, there is no “side” to back in this war. Both Putin’s illegal invasion and the U.S./NATO “regime change” game should be opposed. The people of Ukraine are paying the price for this war with their cities, towns, homes, and lives. The people of Russia, meanwhile, are on the receiving end of some of the most severe economic warfare measures ever.

Those of us in the NATO countries are paying, too. Inflation and soaring fuel prices are already eroding our wages and living standards. But even more than that, we’ll be paying for generations to come, as billions of dollars flow away from things like health care and housing toward bombs and fighter jets.

When it comes to the senseless destruction and profiteering of war, it’s not just Russia that has fallen into a trap. We’re all caught now, and only a mass mobilization for de-escalation, détente, and demilitarization can get us out. 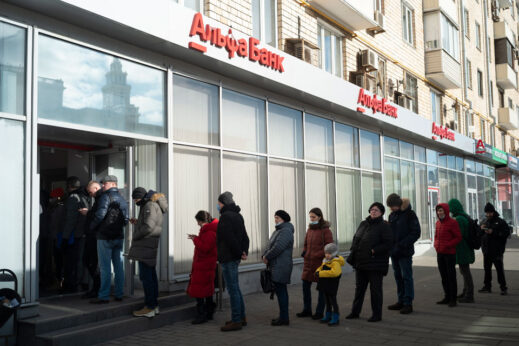 C.J. Atkins is the managing editor at People’s World. He holds a Ph.D. in political science from York University in Toronto and has a research and teaching background in political economy and the politics and ideas of the American left. In addition to his work at People’s World, C.J. currently serves as the Deputy Executive Director of ProudPolitics.