In this writing task 1 bar chart sample you have to make comparisons of house prices over three time periods.

Having a well-organised answer is a key factor in scoring well on the Task 1 as an answer that is not well planned will be difficult to follow and confuse the examiner.

So ensure you take some time at the beginning to decide how best to present the information given to you in the chart.

This chart looks at little confusing at first, but you are basically comparing the first bar chart to 1989, then the second one to 1989, in terms of whether prices are higher or lower.

You should always make sure you note the main changes or features. In this case it is immediately noticeable how much lower the prices are in the first chart, while in the second chart two cities in particular (Tokyo and London) have seen a turnaround.

So you must refer to these in your response.

Summarize the information by selecting and reporting the main features and make comparisons where relevant. 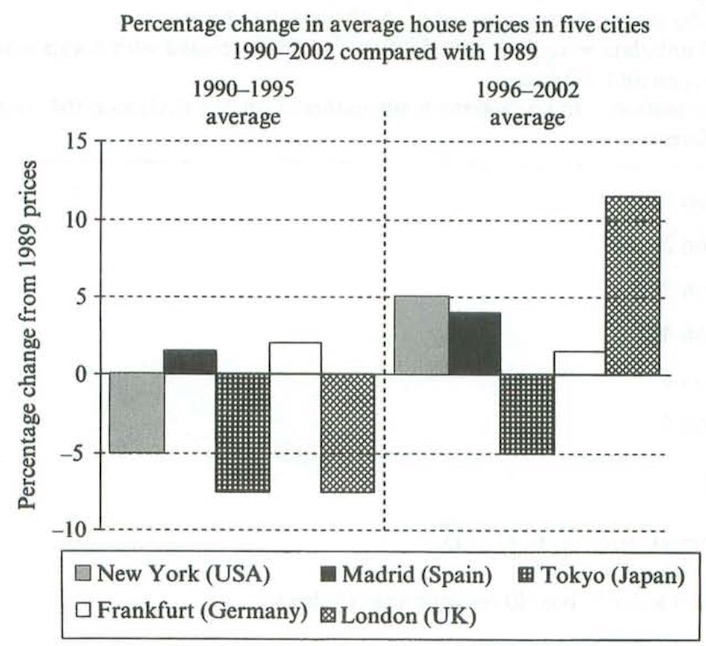 The bar chart compares the average prices of houses in five cities in 1990-1995 and 1996- 2002 with average prices in 1989. Overall it can be seen that while the first period saw quite a significant drop in average prices compared to 1989 in several cities, the following time frame tended to experience a reversal of this trend in most of the locations.

From 1990-1995, three of the cities, namely New York, Tokyo, and London, saw average prices that were around 5% to 7.5% lower than in 1989. On the contrary, the cost of houses in the cities of Madrid and Frankfurt were slightly higher, by approximately 2% and 2.5% respectively.

Turning to 1996-2002, prices looked very different. Madrid and Frankfurt continued to see higher prices comparative to 1989, but while in Madrid they were now 4% higher, in Frankfurt they were only 2% above 1989 levels. In Tokyo, the only city to remain in negative territory, prices were still below 1989 levels, standing at -5%.

The most noticeable changes, however, were evident in both New York and London, with the former seeing average prices at 5% above those of 1989, the exact opposite of the previous period. London, though, had had a significant turnaround, with prices now 12% higher.

This writing task 1 bar chart sample answer would score highly because it is organised well, correctly reports the data and changes, and highlights some of the main changes.

It also uses a good mix of vocabulary and range of grammatical structures.

“I think these eBooks are FANTASTIC!!! I know that’s not academic language, but it’s the truth!”

FacebookTwitterPinterestTumblrRedditWhatsApp Enjoy this page? Please pay it forward. Here’s how…

Would you prefer to share this page with others by linking to it?

How To Write an IELTS Bar Chart Essay

IELTS Exam and Fees in USA

How to Register for IELTS exam?