After months of tensions, Russian forces launched a “special military operation” in Ukraine on February 24 with explosions heard across the country. Kyiv said a “full-scale invasion” by Moscow was underway and declared martial law, saying Ukraine will defend itself.

The map below shows known locations that have come under attack during the past few hours. The map will be updated as more information becomes available:

Conflict at a glance

Weeks of intense diplomacy and the imposition of Western sanctions on Russia failed to deter President Vladimir Putin, who has massed between 150,000 and 200,000 troops along the borders of Ukraine.

Shelling has intensified since Monday when Putin recognised two separatist regions as independent and ordered the deployment of what he called peacekeepers, a move the West called the start of an invasion.

Read more about Why Russia is attacking Ukraine here.

In recent weeks, dozens of countries have urged their citizens to leave Ukraine. Many airlines have generally avoided flying over eastern Ukraine since 2014, after Malaysia Airlines flight MH17, flying from Amsterdam to Kuala Lumpur, was shot down over separatist-held territory. All 298 people on board, 198 of whom were Dutch citizens, were killed. 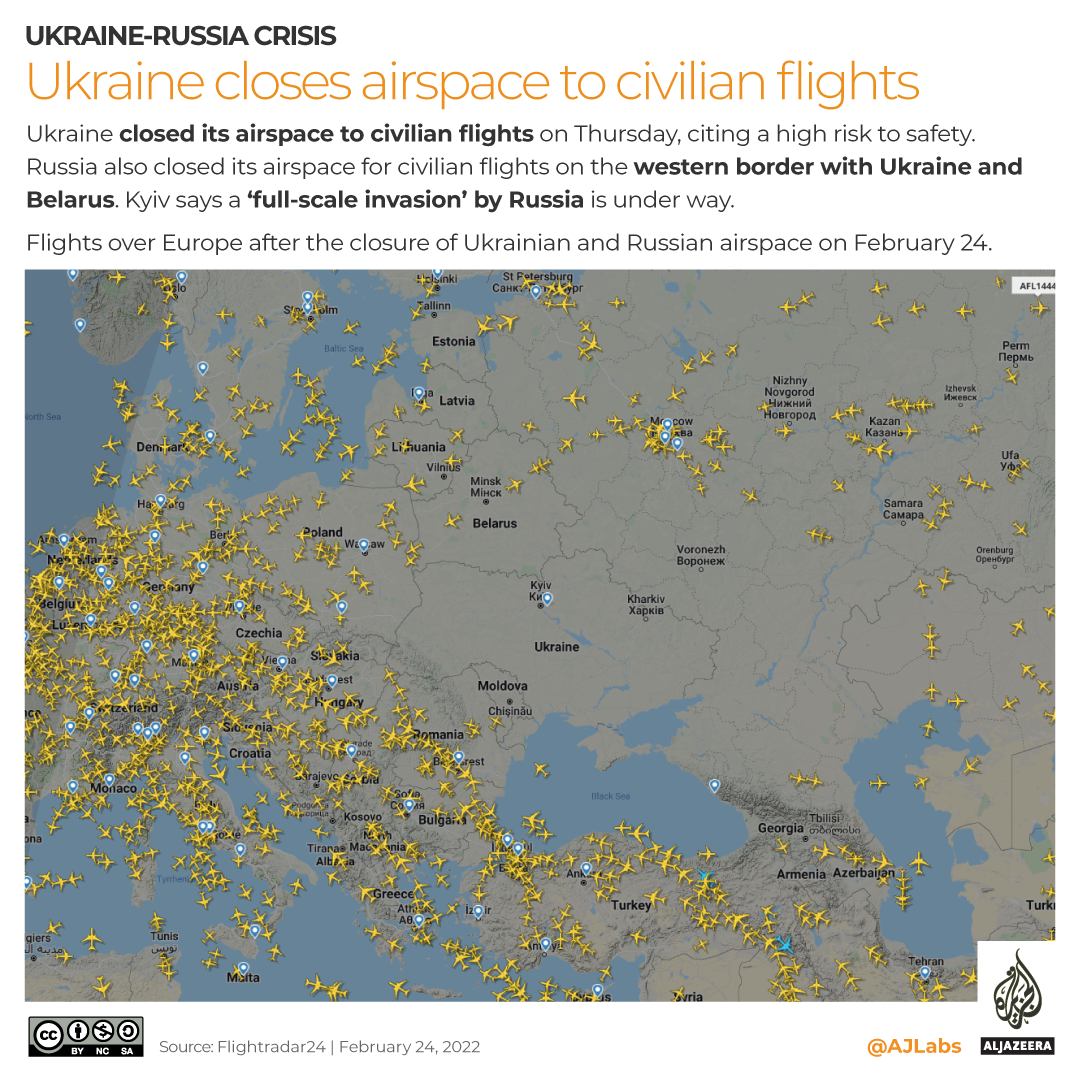 Learn More: How do you join NATO and how close is Ukraine to becoming a member?

Russia has one of the most powerful militaries in the world and ranks among the top five defence spenders.

Since tensions began, NATO allies, fearful of a potential ground invasion by Russia, have stepped up support for Kyiv by sending military equipment to Ukraine.

Read more about the military capabilities of Russia and Ukraine here 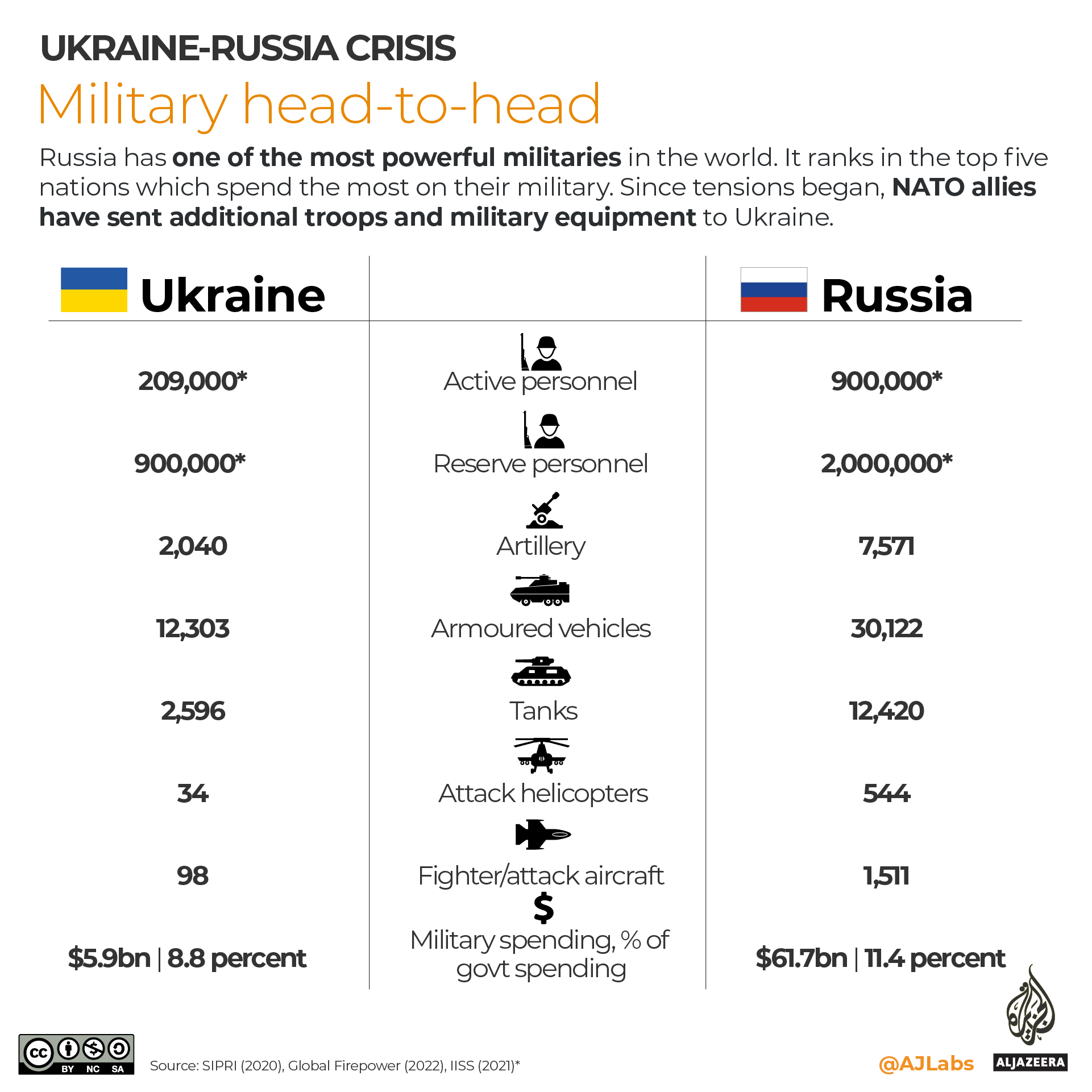 NATO is the world’s most powerful military alliance. Comprising 30 nations, its primary role is to protect its member states by political and military means.

Russia opposes NATO bases near its borders and has asked for written guarantees that NATO will not expand eastwards. One of the Kremlin’s central demands is that Ukraine never be allowed to join NATO – a move it considers a red line. The United States has refused to concede to this demand. 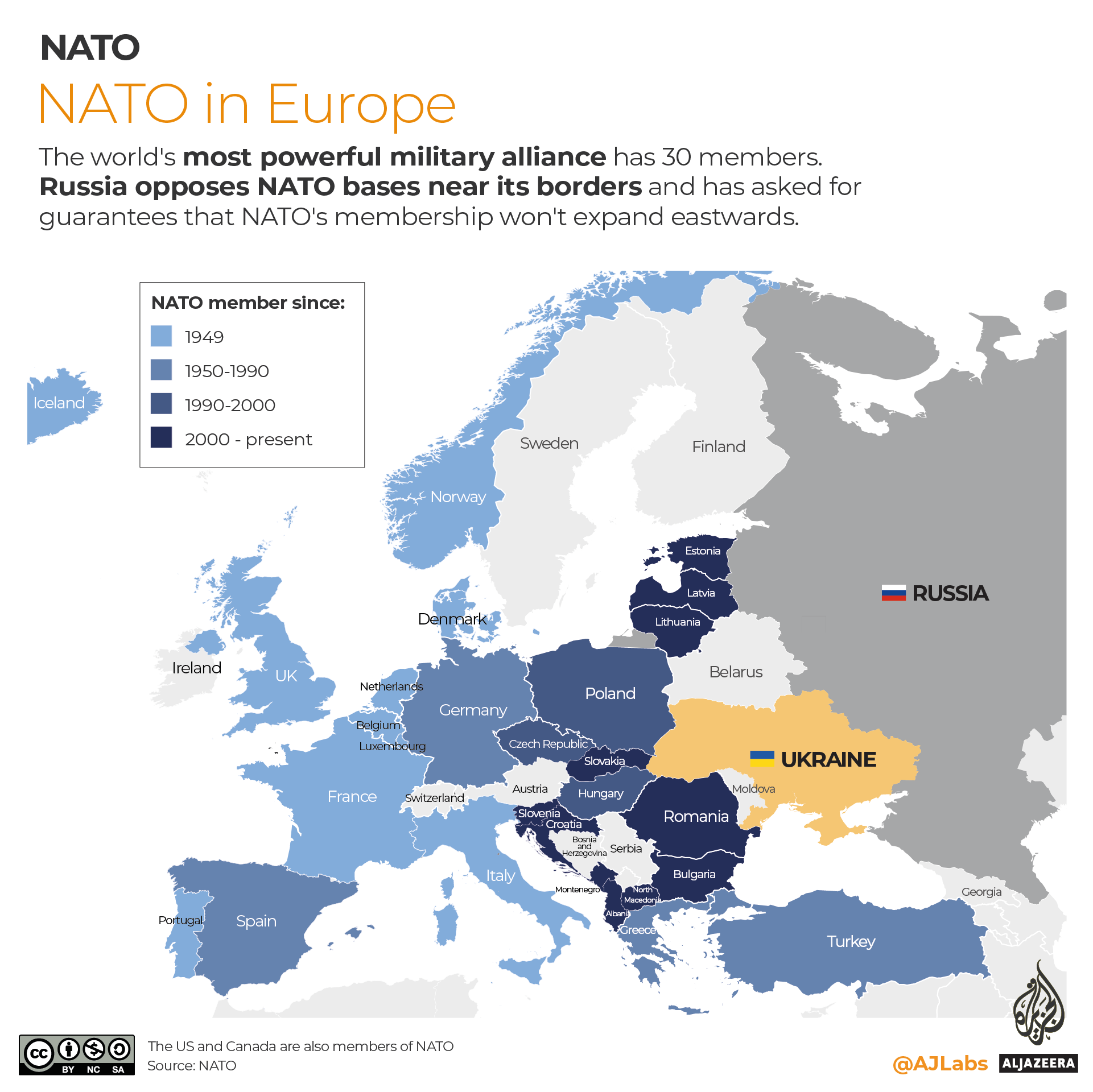 Russia and Ukraine are both rich in oil and gas. Russia has the world’s highest proven gas reserves at 48,938 billion cubic metres. More than 70 percent of the country’s gas reserves are held by Gazprom, a state-owned energy giant.

Watch more: What if Austin were Kyiv? Map shows how Russian invasion of Ukraine, war zones can hit close to home

Russia supplies about one-third of Europe’s natural gas. US sanctions over the conflict could disrupt that supply, exacerbating Europe’s energy crisis. On February 22, Germany halted the certification of Nord Stream 2, an $11.6bn Russian gas pipeline project that was designed to move 151 million cubic metres of gas a day into Europe.

Russia also has some of the largest proven oil reserves, at 80 billion barrels, or 5 percent of the world’s total.

Ukraine, too, has a sizable reserve of oil and gas at 395 million barrels and 349 billion cubic metres, respectively. The country sits at the crossroads between the West and Russia, and plays a key role in delivering Russian gas to European markets.

Read more about the world’s oil and gas pipelines here 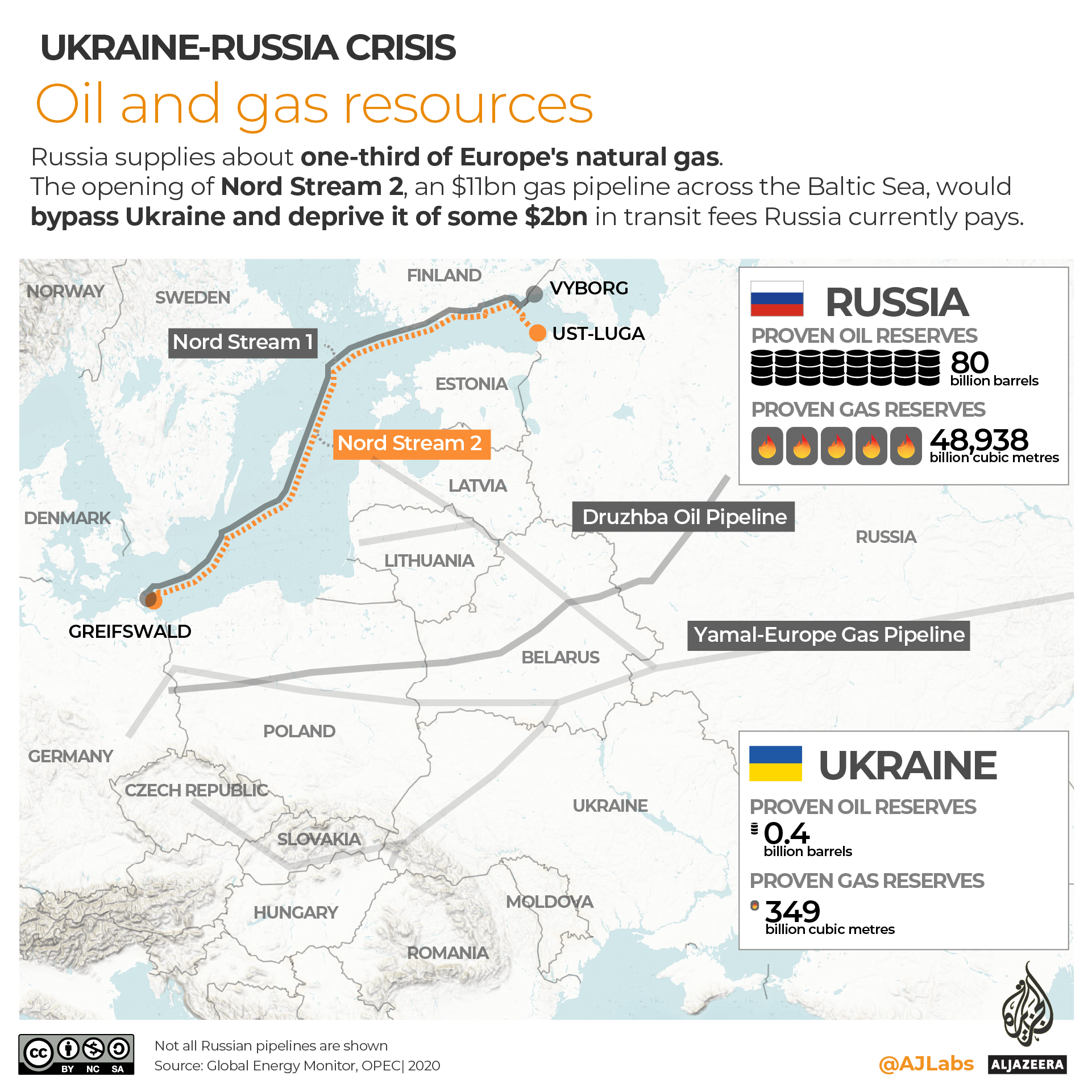 More than one-quarter of the world’s wheat exports come from Russia and Ukraine.

Economic sanctions or military action may have a significant effect on the cost of food as importers seek to find alternatives. 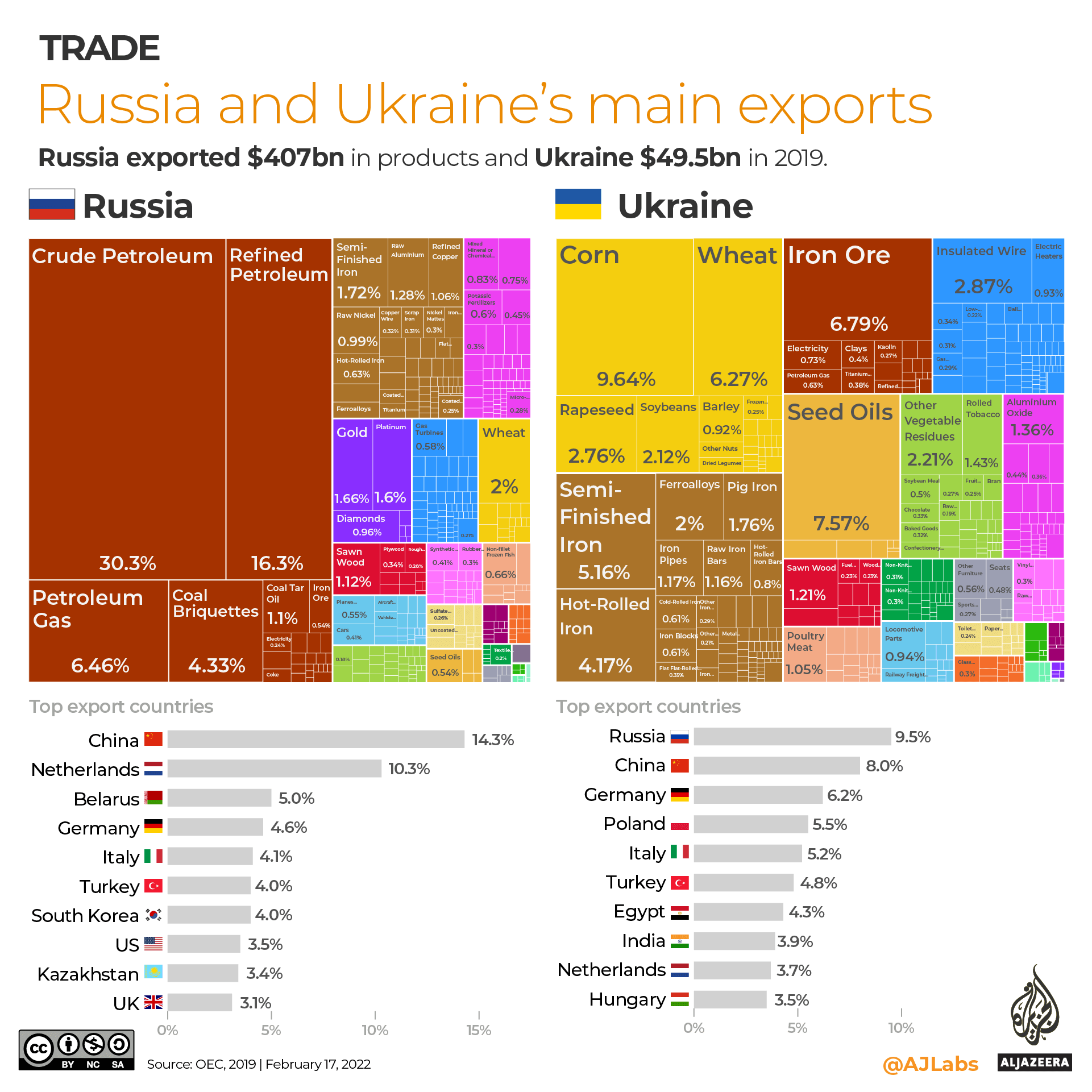