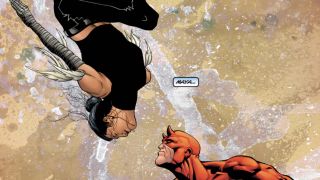 In the book of Revelation three different beasts are described as having seven heads and ten horns: first, the “great red dragon” (Rev. 12:3) ; next, the leopardlike beast which John saw rise out of the sea, having the feet of a bear and the mouth of a lion, and drawing his power and authority from the dragon (Rev. 131, 2); and last, the scarlet-colored beast on which sat the woman, Babylon, “mother of harlots and abomina­tions of the earth” (Rev. 17:3-5).

Each of these beasts, is represented as being at enmity with God and at war with the forces of righteousness. It was the great red dragon that had part in the “war in heaven,” when ‘Michael and His angels fought against the dragon; and the dragon fought and his angels.” Rev. 52:7. It was this dragon which “stood before the woman which was ready to be delivered, for to devour her child as soon as it was born.” Rev. 12:4. And it was this same beast which with great wrath came down against the “inhabiters of the earth and of the sea” (Rev. 12:12); which “persecuted the woman,” drove her into the wilderness, cast forth a flood of water against her, and made war with the remnant of her seed (Rev. 12:13-17).

Concerning the leopardlike beast of Revelation 13, the question is raised: “Who is like unto the beast? who is able to make war with him?” Rev. 13 :4. This beast was engaged in blasphemy against God, His tabernacle, and those that dwell in heaven, and made war with the saints. (Rev. 13:5-7.)

In the struggle which the seven-headed beast carries on against the forces of righteousness, its doom is in each case foretold. In the war fought by the dragon in heaven, the dragon “prevailed not,” but “was cast out into the earth, and his angels were cast out with him.” Rev. 12:8, 9. In his struggle against Christ and His saints, “the accuser of our brethren is cast down,” while the saints “overcame him by the blood of the Lamb.” Rev. 12:10, II. Of the leopard beast that made war with the saints and overcame them, the final doom is expressed in the words: “He that leadeth into captivity shall go into captivity: he that kill­eth with the sword must be killed with the sword.” Rev. 13:10. And of the heads of the scarlet beast of Revelation 17 it was said that five had already fallen, while the beast itself would finally “go into perdition.” (Rev. 17:8-11.)

MULTIHEADED BEASTS IN SCRIPTURE.—Though the powers symbolized by the leopard and scarlet-colored beasts are not specifically named in the Scriptures, we are told that the great red dragon was none other than “that old serpent, called the Devil, and Satan, which deceiveth the whole world.” Rev. 12 :9. From the close parallelism between these three seven-headed, ten-horned powers, it is clear that all three must be demoniacal agencies, symbolizing both Satan himself and those forces on earth through Which he carries on his age-long war against heaven.

That the seven heads represent seven consecu­tive powers through which Satan works on earth, and that these will successively meet their doom, is evident at least in the case of the scarlet-colored beast, from the record that of the seven kings rep­resented by the heads, “five are fallen, and one is, and the other is not yet come.” Rev. 17:10.

This picture in Revelation of a serpent, beast, or dragon engaged in war against God and the forces of righteousness is not new, nor is it confined to the Holy Scriptures. In the early records of Gen­esis, where the first chapters of this struggle between Christ and Satan are recorded, the development and final issue of the battle is announced in the following words: “I will put enmity between thee and the woman, and between thy seed and her seed ; it shall bruise thy head, and thou shalt-bruise his heel.” Gen. 3:15.

Job describes this battle as follows : “He stirred’ up the sea with His power, and by His understanding He smiteth through Rahab. By His Spirit the heavens are garnished; His hand bath pierced the swift serpent.” Job 26:12, 13, A.R.V. Other careful translations of the passage are as follows : “By His power He quelled the sea, and by His wisdom laid low the Dragon; by His breath the skies were cleared, and His hand maimed the swift cloud-monster.” (Moffatt.) “His hand slew the fleeing – serpent.” (American Translation.) “His hand hath pierced the slant serpent.” (Jewish Translation.) Isaiah’s description of the conflict is very similar: “In that day the Lord with His sore and great and strong sword shall punish leviathan the piercing serpent, even leviathan that crooked ser­pent; and He shall slay the dragon that is in the sea.” Isa. 27:1.

That the picture of leviathan as a multiple-headed creature was already familiar in the days of the psalmist is clear from the following words : “God is my king of old, working salvation in the midst of the earth. Thou didst divide the sea by Thy strength: Thou brakest the heads of the dra­gons in the waters. Thou brakest the heads of leviathan in pieces.” Psalms 74:12-14.

SEVEN-HEADED MONSTERS OF PAGANISM.—TO many a student of the Bible it comes as a matter of surprise that the seven-headed dragon, as an antagonist of the gods, was well known in early Syria and Mesopotamia. Among the very interest­ing tablets found a few years ago at Ras Shamra, in northern Syria, written about the fourteenth century b.c., is one ‘on which instruction is given td Baal on how -to vanquish leviathan, the seven-headed monster of the sea. The name used on these tablets for leviathan is identical with that used in the Hebrew of the Old Testament. And the same descriptive phrases concerning this mon­ster and the battle against him are found on the Ras Shamra tablets as are found in the Old Testa­ment.’ Just as Isaiah describes how the Lord attacked leviathan with His “great and strong sword,” so in the Ras Shamra inscriptions this enemy of the gods is attacked with a lance or spear.2

An early Mesopotanlian sun-god was Ninurta, son of Enlil and twin brother of Nergal. The su­preme function of this deity was war on behalf of the gods and his people. By the great gods Ann and Enlil he was given the charge to subdue the dragon of chaos, vshumgal, the “Great Sea Ser­pent,” and his ally Zu. In an old Sumerian epic is found a hymn of praise by Ninurta concerning his mighty weapon of conquest, from which the following lines are taken:

My weapon with seven heads, wrathful crusher of bat­tle, power of heaven and earth, before which the wicked escape not, I bear.” 3

Probably the most interesting pictorial repre­sentation of a seven-headed monster is found on a seal of the Sargonid period, shortly before 2000 s.c.4 A god attacking the hydra with a spear has killed four of the heads, which hang limp in death, while three are still alive and fighting, striking out at their assailant. Six long wavy horns protrude from the back of the monster. A second god, like­wise armed with a spear, assists the main combat­ant. Still another pictorial representation of a similar creature is that of a seven-headed snake found on a seal impression from Tell Asmar.5

COMMON ORIGIN FOR BOTH RECORDS.—The ques­tion may be asked as to what is the significance of -these identical concepts among the Hebrews and their neighbors. That there must be some relation­ship seems quite clear, for two peoples would hardly have developed such an outstanding and striking symbol entirely independent of each other. And inasmuch as many of the seals and tablets of Syria and Mesopotamia on which these seven-headed creatures are portrayed come from a period prior to that during which Hebrew materials in their present form were put into writing, there are those who will conclude that here is positive evi­dence that the Hebrews borrowed these as well as others of their religious concepts from their neighbors.

Watch more: What does Hawkeyes new look mean for the Avengers?

Xem Thêm : Hawkeye – Maya Lopez AKA Echo’s Marvel Comics’ history has a lot to say about her MCU future

But is this necessarily the case ? Not at all. On the contrary, there is increasing evidence that many such early Babylonian stories as those of the creation, the fall, the deluge, etc., which frequently bear a remarkable similarity to the accounts of Genesis, simply go back to the same common orig­inal as do the stories of the Old Testament. In other words, the evidence is not that the Hebrews borrowed these things from their neighbors, or that the Babylonians borrowed them from the He­brews, but there are definite indications that in both Babylonia and Judea concepts existed which in each case came down from generation to gener­ation, and that in the remote and distant past there was some common meeting point where these strik­ingly similar conceptions had their origin, either in some outstanding event of history, some per­sonal experience, or some divine disclosure.

The first concept of the serpent as an enemy of God and man no doubt had its origin after the fall in Eden, when God by divine revelation made known to man the future struggle that would take place between Christ and Satan, and between the forces of right and wrong. After the deluge, when Satan again entered upon his desperate efforts to gain control of the world through various powers which he would direct and dominate, God gave to man a revelation of that which was to come.

At that very early time, when history was just beginning, God no doubt made known that through the ages to come Satan would put forth his efforts to gain control of the world by powers of his own devising. Also revealed was the fact that all these efforts would come to nought, and that the powers established by Satan and aimed against the au­thority and administration of God would encounter the opposition of heaven and fall by divine decree. This, in all probability, was revealed to man in those early ages under the symbol of the hydra with its seven heads.

At the time of John, when Rome was the power in control of the world, another revelation was given, disclosing the fact that by that time five of the “heads” of the dragon—the powers through which Satan endeavored to control the world—had already fallen, and that the others would also meet their doom in due time. This very vivid symbol of a serpent with its seven heads, warring against God and doomed by divine decree, made an im­pression upon both God’s people and their neigh­bors which was never forgotten but was handed down from that time to this, not only among the Jews and the peoples of Syria and Babylon, but among many of the remotest peoples of the globe, to remind the world that God is King, and that it is His sovereignty which will ultimately rule over a world that is rightfully His.